I did it again. I went in the different direction from “common sense” and used dynamic memory allocation in my embedded products. Many expert embedded programmers would say “No, you should not”, however if you implemented a correct allocator why not?

The major concerns about dynamic memory in microcontroller is:

First of all, a string class that handles the string and being able to write the following would be very nice:

I’ll write details of my String class in another post. To be fair, I just want to say myDearString is not allocated in heap, because string literals are kept in ROM, String class exploits that by looking at the address of argument, and just keeps a pointer to it.

In Awin library (a GUI library), many messages are passed to application: Keyboard presses, releases, mouse movements etc. Those are different types with nearly similar sizes. If I didn’t used heap, I should create memory pools for those. Another layer of burden..

Again in Awin library, the clipping regions are calculated on the fly. For those haven’t cared what clipping region is: Suppose the following, a button inside window:

Window manager has two options to draw whole window: First draws Window area, which erases Button area, than draws Button area. This causes two problems: Unnecessary drawing the area under the Button, and unnecessary flicker. If you don’t count it as an effect though.

The window manager splits the area into areas that don’t have intersections as following:

Than calls draw methods of each class with given regions.. Because the draw methods do not erase what other methods have done, this method save CPU time (read it as speed, less power, longer battery time) and flicker at a certain leve as well.

Suppose the application made another objects, let say, a label visible. Now the clipping region map would be different..

To support dynamic (did I say dynamic) mapping of clipping regions, I would have created another memory pool for clipping subsystem. Which is managing another memory.

For years, when I had to use the code other people created for embedded systems, such as Bluetooth LE, FAT, protocol handling libraries, I had to deal with ugly macros to start up. To turn on this feature write this macro, to set buffer size, define this macro, to define how many tasks your application would use set this macro.

Because it creates a lot of errors, Keil made a configuration page for its macros: 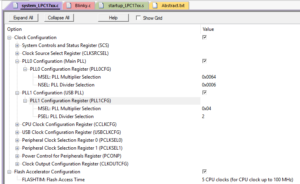 I cannot blame that is bad. In the past I used it to configure my builds to turn on and off features. However, it is just a neat way to define macros that’s it..

What if the system configures it self and gives the developer a better interface. For instance to set a serial ports transmit fifo, wouldn’t be more readable if we write:

Or to create a new thread:

It creates a thread with default size of stack. You may set the stack size as well:

I know, those last two samples are static allocations that uses dynamic allocation. But neat! Isn’t it?